Over time, Germany as a footballing nation has been ruthless. They have had multiple times where the referee blows the full-time whistle and leave the watchers sat at home, thinking ‘How have they won that?’ It’s true, Germany do have their fair share of luck.

For Michael Ballack, it was a little different. He was Germany’s nearly man, described by Udo Muras for Die Welt as “the lone shining light in a leaden era” – he never had the glittering talents alongside him such as Toni Kroos or World Cup winner Mario Götze, instead he had Torsten Frings and Carstein Jancker as his teammates for Die Mannschaft.

So, what legacy did Michael Ballack leave behind? Did he leave behind the legacy, if you could call it one, of being the greatest loser of Germany’s history, or was it that he was an undisputed midfield genius? A bit of both, perhaps.

With 98 caps for Germany, Ballack left the game as one of the best German midfielders ever and as a UNAIDS Ambassador, his career involved winning Bundesliga titles with Bayern Munich as well as a Premier League honour with Chelsea, but for every high, there was always something that stood in his way.

Born on 26 September 1976, the feeling is that Michael Ballack was born a decade too early. Just pause for a second and imagine him in that 2014 Germany side. Pause for another second and imagine him filling the void left behind by Frank Lampard at Chelsea. The pressure on Ballack to perform for club and country was high, he even said himself:

“They wanted me to win the ball at the back, dominate in the center, play a pass to myself in the final third, and score the goal.”

The strange thing is, Ballack did do that, a lot of the time – he had that knack of always being in the right place at the right time, which is strange because his career has been described as right player wrong generation.

Ballack quite literally was the system for club and country, especially in the early 2000’s. Nothing quite sums up his career than the 2001-02 season, when Bayer Leverkusen were on the verge of a treble – in pole position for their first ever Bundesliga title, in the DFB Pokal final, as well as the Champions League final.

In that season, Ballack scored 23 goals from midfield, but it wasn’t quite enough. From five points clear, Leverkusen lost the title with losses to Bremen and Nurnberg meaning Dortmund clinched the silverware. The weekend later, Leverkusen lost the chance of winning the Pokal by losing 4-2 to Schalke. A few days later – you guessed it – Leverkusen lost in the Champions League final, thanks to that Zidane volley. 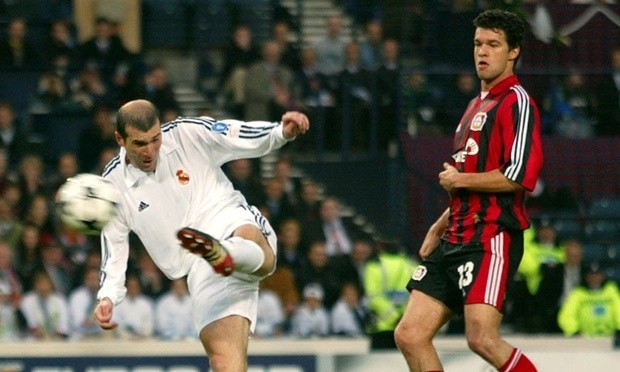 The bad luck wouldn’t stop there, as that summer, Germany and Ballack – this is getting boring now – lost in the final. It could’ve been four trophies that year, but Ballack ended empty-handed, and Ronaldo tipped him to the Ballon d’Or to make matters worse.

What is missing from the history books, however, is that Ballack was a pivotal figure in a heroic season for Leverkusen, who were huge underdogs, and led a Germany side to the final, on the back of a dismal display four years earlier. German journalist and author Raphael Honigstein emphasised his presence as an indispensable cog of the German national team setup by saying: “Ballack didn’t just become the most important player in Völler’s system; he became the system itself. Germany were supposed to keep things tight at the back, then snatch a goal through a Ballack header or shot from the edge of the box.”

Rudi Völler himself was a fan of Ballack, saying at a later date: “It was a classic case of people confusing cause and effect. We were missing two or three more Ballacks at the time.”

Ballack moved on to Bayern Munich where he spent four years and won multiple titles for the Bavaria club, before jetting over to Chelsea where again, he won titles, but there was still something missing.

“Titles are sometimes overrated. Of course, Lothar Matthäus is always going to be associated with the 1990 World Cup. But does everyone immediately remember what titles Günter Netzer, Johan Cruyff or Luís Figo won? Or do they also think about how those players played their football and how they led their teams? I hope that people will remember me as a special footballer” – Michael Ballack after retirement.

In his own right, Michael Ballack is a football legend. 11 titles on its’ own is a trophy haul worth legendary status, and although it could’ve been so much more, Ballack will forever be at the brink of football immortality. Remember him for the trophies he won, not for the trophies he nearly won.

Lewis is content manager and editor at 5WFootball. He is also an MA Journalism student and freelance writer for various sites such as These Football Times, City Watch and Football League World. Contact him at lewissteele46@aol.com or follow him on Twitter @LewisSteele_