For the second year running, Newport County defied logic and odds to overcome English football giants in the FA Cup. Padraig Amond, who scored against Spurs last year, netted the all-important penalty to secure the Welsh minnows a historic and seismic upset against former Premier League champions, Leicester City. This time last year, goals from Conor Shaughnessy and Shawn McCoulsky saw off the mighty Leeds United. Not bad, hey? It’s not always been glamorous for football in the city of Newport, however, and our man Lewis Steele has explored the history and murky tales of the numerous clubs that have operated under the name of Newport…

“Supporting the County is more like a game of snakes and ladders than football, it’s just up and down up and down” – one Newport County fan in a montage made by the BBC ahead of Newport’s clash with Leicester this weekend.

Newport County FC were one of the masses of clubs that swept into the Football League upon its expansion in 1920, when a Division Three North (and South) was made. After a couple of decades, the club rose to Division Two, but the outbreak of war meant their squad was broke up and the team that finally played the 1946/47 season was completely different from that who won promotion. In that season, they lost a record 13-0 to Newcastle United.

Nevertheless, Newport County FC were content as a Football League club, and the 1980’s saw a brief golden era for the club.

Under the management of Len Ashurst, the ex Sunderland defender, Newport were promoted to Division Three. In the follow season, the club won the 1981 Welsh Cup for the first and only time, entitling them to a place in the European Cup Winners Cup. The Third Division side were handed a few kind draws in the early rounds, but they were desperately unlucky to lose in the quarter-finals and miss out on a trip to Benfica in the last four. Five years earlier, Newport were close to bankruptcy, having to apply for re-election to the Football League (which was the 10th re-election process in their history). 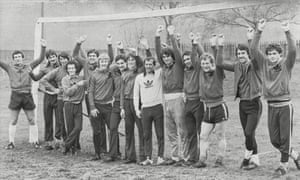 Newport’s first round was against Northern Irish part-timers Crusaders, a team made up of all the tradesmen likely to win you big bucks at a ‘part-time jobs of players in this game bingo’ – you’ve played that before while watching England v San Marino, right? Of course you have! Crusaders were made up of civil servants, plasterers, factory and shipyard workers, you name it – the manager had to take four days of unpaid leave from his role as head of science at a Belfast high school. Enough on Crusaders, Newport earned the spoils on the night, winning 4-0 in front of 6,285 people at Somerton Park, with goals from the likes of John Aldridge.

The next round saw Newport crush Norwegian side Haugar by a 6-0 scoreline. European heavyweights awaited in the next round, with the likes of Benfica, Dinamo Tbilisi and Feyenoord waiting in the wing. They avoided those though, and drew East German giants Carl Zeiss Jena, who had knocked out Roma and holders Valencia.

Ashurst and Newport recorded a mighty 2-2 draw in East Germany, which should not be undervalued. Nearly 20,000 fans shoe-horned into Somerton Park for the return leg, but it sadly wasn’t to be.

‘Heartbreak’. The Daily Mirror summed up the tie with their headline the following day. Jena lost the final, and for both clubs, it was a zenith moment in their history, and both have suffered a great diminution of fortunes since. Nearly 40 years since Newport went behind the ‘Iron Curtain’ to play against the East Germans, the clubs share a unique bond. To mark Jena’s 110th anniversary, they hosted Newport County – both teams reminisced in their ‘glory days’.

Sadly, the years that followed for Newport were the beginning of the end and things started to turn a little sour, with Ashurst sacked in February. The club narrowly missed out on promotion to Division Two the following season, despite leading the table at Easter.

Brash American Jerry Sherman took over the club in 1986. He oversaw the destruction of the club. Players were unpaid and the club was relegated from Division Three in 1987. Newport were relegated to the non-league in 1988, conceding over 100 goals along the way, and were wound-up after going bust. The ground, Somerton Park, was sold. The name of the football club was sold, even the clubs lawnmower was sold, just to raise funds. £12,000 was the fee that was received from the auction – eight decades of history for a meagre £12,000.

Sherman’s background became apparent – fraud and police investigations, collapsed businesses in Canada. By this time, it was too little too late for Newport County. They were wound up with debts of £330,000.

This article may focus on football in Newport, but the club had to play seventy miles home from Moreton-in-the-Marsh for a while. In many cases, many away games were closer to Newport than the home games were. Under the new name of Newport AFC, the club didn’t return to Newport until 1994 at the Newport Stadium, promoted into the Southern League Premier in 1995, three tiers below the 92. In 2013, a day short of when they last appeared in the Football League, Newport returned, beating Welsh compatriots Wrexham at Wembley via the Conference play-offs. After a whole generation in the wilderness – literally, as goal-scorer Christian Jolley was not alive when Newport were last in the Football League – the Amber Army returned to the promised land.

If it wasn’t for the fans, the city of Newport would not have a club. But Newportians are used to not giving up: in 1909, rescuers crawled into a collapsed trench to rescue trapped workmen. A 12-year-old boy crawled in trying to rescue some of the trapped, showing the heroic nature of the people of Newport, Monmouthshire.

It was this tenacity that kept the football club alive. 400 fans met at a building named the Lysaght Institute to reform the club – the building was named after John Lysaght, who contributed to the area’s largest employer, the Old Steelworks. In fact, Lysaght’s determination to open a steelworks in Newport could be seen as one of the driving factors that Newport County FC were ever formed in the first place. Workers from Wolverhampton – hence the black and amber colours of Newport – built the Newport Transport Bridge. They wanted to bring football to a majorly rugby-orientated area. And so they did.

Nine decades on, after forming again, the new club had a huge uphill battle, with both Newport Council and the Football Association of Wales. Both bodies refused to let them operate in Wales, as they believed they were just the old club in disguise.

The win against Leeds, taking Spurs to a replay, seeing the amber and black shirts beat Wrexham at Wembley, defying Leicester in 2019 – none of it would be possible without the fans. Many of these modern day memories have been led by local lad Michael Flynn, who played in that Wembley final.

The Exiles, The Port, The Ironsides – three nicknames that perfectly sum up Newport. They may not have the glamorous stories of Swansea or Cardiff, but they have a story that is well worth reading. A true football fairytale showing the importance of fans in football. The future is bright, the future is amber.

One thought on “The city of Newport: an unlikely setting for football fairytales”